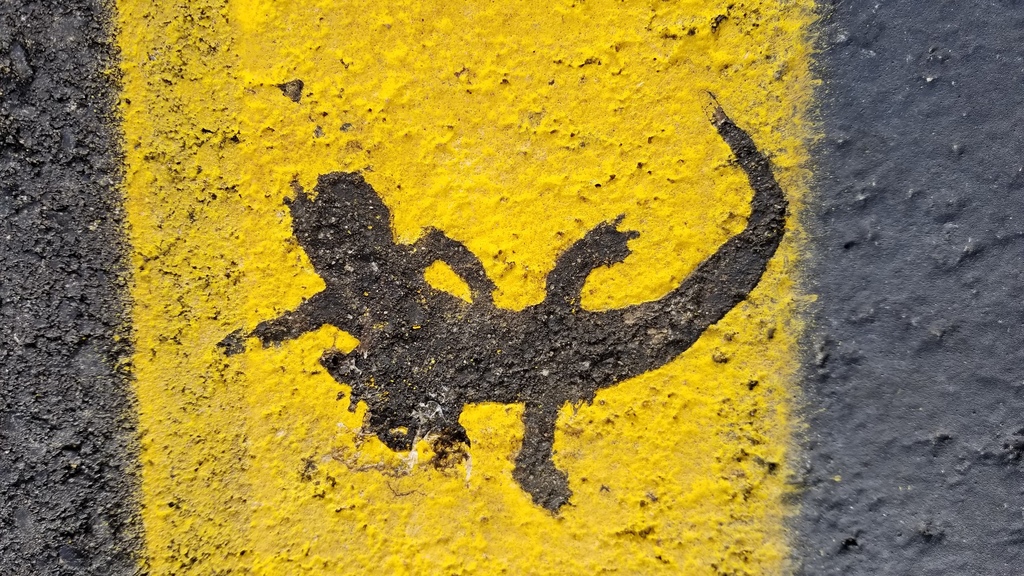 The silhouette on the yellow line occurred when the County was painting lines on the newly repaved portion of Alma Bridge Road, and painted over a dead newt. (Photo by Stacie Wolny)
A version of this was originally posted by Bay Nature on March 2, 2021.

But our enjoyment of this park can come at a steep cost for wildlife – especially the beleaguered local population of Pacific newts.

About 5,000 newts are killed every year by cars and bikes on Alma Bridge Road, the park’s only access road. As a herpetologist who has studied human activities’ impacts on amphibians, I find this deeply troubling, in part because it’s entirely avoidable.

Santa Clara County and other public agencies can make this road safer for newts and other sensitive wildlife. But so far they’ve failed to act.

Amphibians, including newts, are in crisis across the world. About 200 amphibian species have collapsed to or near extinction since the 1970s, and more than 40% are threatened with extinction.

A live newt walks away after crossing the road as cars drive by. (GIF by Karan Gathani)

Community scientists have been documenting the carnage on Alma Bridge Road for several years. They alerted local officials, hoping to get some protections for the newts. But they’ve been met with inaction.

Newts are most active in the rainy season from November to May. When the rains start, they emerge from their summer burrows for some grub, like earthworms. Many take on a difficult journey each year, traveling up to two miles across treacherous roads to their winter breeding pools.

These small, slow-moving amphibians don’t stand a chance against the Teslas and SUVs speeding through.

Despite the thousands of newts run over every year on Alma Bridge Road, officials have failed to adopt readily available solutions to protect these small but ecologically important animals.

Yet Santa Clara County ignored a recent opportunity to make cost-effective improvements. Last fall the county unexpectedly repaved large segments of the road without taking meaningful steps to reduce its impacts on newts and other vulnerable wildlife.

Now people can drive faster through the area (and they do), and more critters will be caught under their tires.

Since the road was repaved, more than 3,500 newts have been killed. With the recent rains and high traffic volumes, the death toll was more than 400 in one week.

But there are still options to improve wildlife connectivity along Alma Bridge Road.

Officials could close the road or limit vehicle access during the rainy season as other regional parks have done.

They could install amphibian under-crossings that include tunnels embedded in the road or a modified cattle guard to help newts safely cross.

And elevated road segments would allow newts to safely cross under traffic.

There’s still a chance to get this right. It’s great that the Midpeninsula Regional Open Space District has paused plans to build a parking lot and additional trails near the road and commissioned a newt mortality study. But with at least 5,000 newts being killed every year, there’s no time for a wait-and-see mentality.

We need to fix our roads to accommodate species movement now, or we will erase California’s iconic wildlife.

Tiffany Yap, DEnv./PhD., is a senior scientist with the Center for Biological Diversity’s Urban Wildlands program.