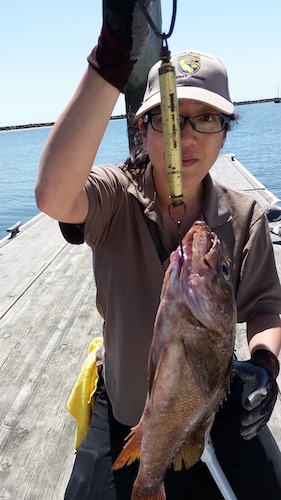 As I hopped onto the boat to measure some fish, I felt a surprising sense of familiarity. The captain asked with a laugh, “Hey, you’re not going to drop any fish, are you? Last time the girl dropped a live one off the boat! I felt so bad for her. She looked like she was going to cry!” At that moment I realized why the boat felt so familiar. I was that girl…I was in training and it was my first boat of live fish… I was MORTIFIED when that happened. Eight months later, there I was, skillfully handling the fish and assuring them that their dinner was not in jeopardy.

Over the past year I worked at the California Department of Fish and Wildlife (CDFW) as a Scientific Aid for the California Recreational Fisheries Survey. My tasks included interviewing anglers (people who fish) and measuring the fish that they caught at various ocean and bay sites around the San Francisco Bay. These data are collected along the entire coast of California and used to determine how wild populations are doing and inform management regulations.

From this work I have realized that conservation is just as much about managing people as it is about managing the species we are trying to protect. I also learned that acknowleding cultural context and good agency-community relations are crucial in natural resource management. 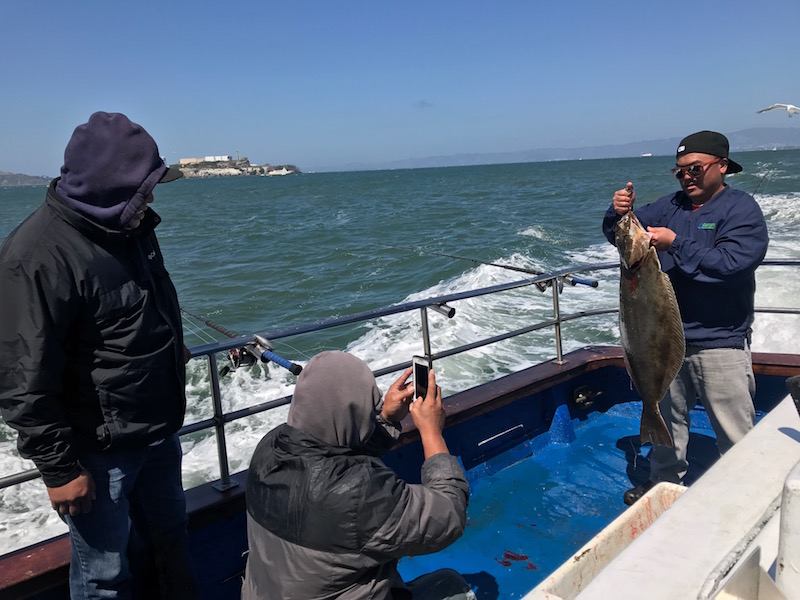 A group of friends out for a day of fishing. Photo credit: Tiffany Yap

CDFW has many responsibilities regarding California wildlife, including the management of recreational fisheries, like salmon and rockfish. For many anglers, salmon season is one of the year’s fishing highlights.

In the San Francisco Bay Area (Point Arena to Pigeon Point) there are two main species of salmon: Chinook (or king) salmon (Oncorhynchus tshawytscha) and Coho Salmon (Oncorhynchus kisutch). Coho salmon are endangered, so it is illegal to keep them. If caught, anglers must return them to the water, or they could be heavily fined.

Chinook salmon are not endangered, but they are highly regulated because their populations have been struggling over the past few decades. They were listed as threatened in 1999 due to their declining populations, and according to a 2016 report from the National Marine Fisheries Service, their populations are still in decline.

To boost the fishery, CDFW releases over 45 million Chinook salmon each year from various hatcheries throughout the state, which allows the fishery to remain open, as long as salmon numbers are high enough. This year anglers in the SF Bay Area were allowed to keep 2 Chinook salmon (per person, per day), as long as the total length of each was 20 inches or more. However, in northern California, stock estimates were so low that the salmon season was completely closed north of Horse Mountain.

To keep track of hatchery salmon, at least 25% of released salmon are tagged with a coded wire that is inserted into the head of the fish prior to release. This tag is not visible externally.

To easily identify the fish that have tags, CDFW removes the adipose fin (the second, smaller dorsal fin that is closer to the tail). Then, come salmon season, CDFW collects the tags from fish that are caught to determine harvest rates, calculate the numbers of hatchery-born and wild-born salmon, and evaluate how release strategies are performing.

To retrieve the tags, CDFW employees chop off the salmon heads and extract the tags in a lab. By law (Title 14, CCR Section 1.73(b)) anglers are required to relinquish tagged salmon heads upon request by an authorized CDFW agent or employee. If anglers are interested in learning which hatchery their salmon came from and how old it was, they can request that information via email. 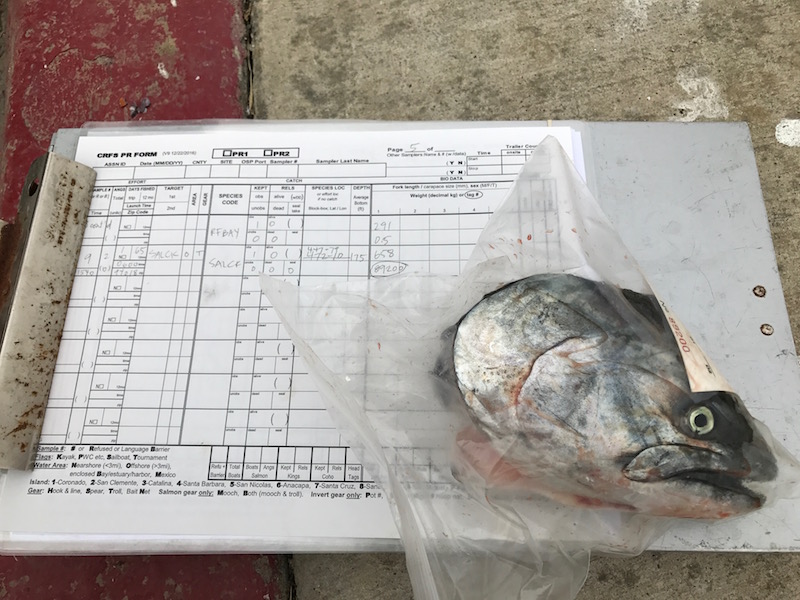 I was consumed with anxiety when I learned that I would be beheading fish. Although most anglers are willing to answer survey questions and understand that these data are collected to help ensure that they and future generations can enjoy these fisheries, some see CDFW samplers as a threat or a nuisance, and some feel that the agency is overregulating the fisheries. Would people really be okay with us taking away a part of their catch?

In addition, most of the recreational anglers that I have interacted with in the Bay Area are from minority communities (mostly Filipino, Vietnamese, Chinese, and Latino) who tend to use all parts of the fish, including the head. Growing up Chinese Filipino, I was taught that the fish head was the most coveted part of the fish, often saved for the head of the family. 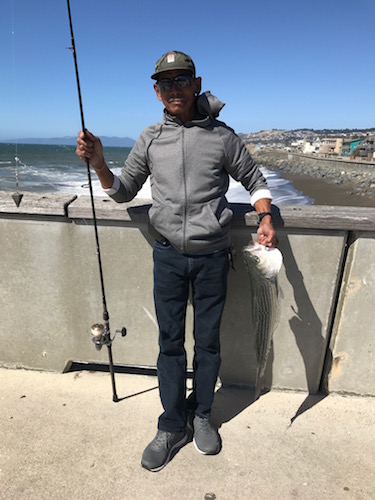 My buddy, Al, with a freshly caught striped bass (Morone saxatilis). I helped him retrieve his catch, and he asked me to take a photo of him. Photo credit: Tiffany Yap

In Filipino cooking salmon heads are often used to make sinigang, a (delicious) tamarind and fish base soup made with salmon heads, spinach, daikon radishes, tomatoes, and onions (although everyone’s mom or Lola makes it slightly differently). I wondered if other cultures had similar signature dishes.

Upon investigation, I found that fish heads are used in a wide variety of cuisines across the globe, for both tastiness and health benefits. Not only do they contain tender morsels of cheek meat, cartilage, tendon, brains, and eyeballs (if you’re willing to put in the effort to extract them), but fish heads are also rich with omega-3 fatty acids and other important vitamins and minerals.

Fish head soups and stews are common throughout East, Southeast, and South Asian countries as well as in Africa, Mexico, and Central and South America. Some examples include vis kop sop (fish head soup, from South Africa), canh chua ca (sour fish soup, from Vietnam), and Chilcano de pescado (“raise the dead” fish soup, from Peru, supposedly a great hangover cure), and many homes have their own versions of fish head soup.

Sometimes the health benefits are engrained in traditional practices. For example, for centuries the Chinese and Taiwanese have provided fish head soup to new mothers to help them recover and produce healthy breastmilk. It seems that the US is one of the few countries that is not up to speed on the tastiness and health benefits of fish heads. 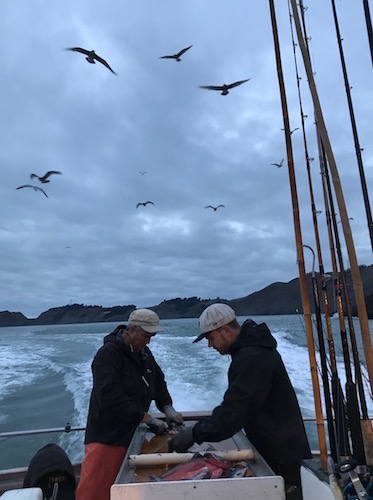 Oftentimes fish heads are thrown away as scraps into the ocean, where sea gulls and sea lions gun for them, or into the trash. This seems like a missed opportunity to serve the many communities that use fish heads.

I remember seeing an elderly Chinese woman waiting patiently at Fisherman’s Wharf for the charter boats to return. She befriended some of the deckhands, who save her fish heads that would otherwise be thrown out. And I have been on a boat where the deckhand set aside a few lingcod carcasses for a regular customer. Although this is a small sample size, I think it is indicative that some communities utilize these resources differently than others, and it is worthwhile to acknowledge the potential for different historical and cultural contexts. 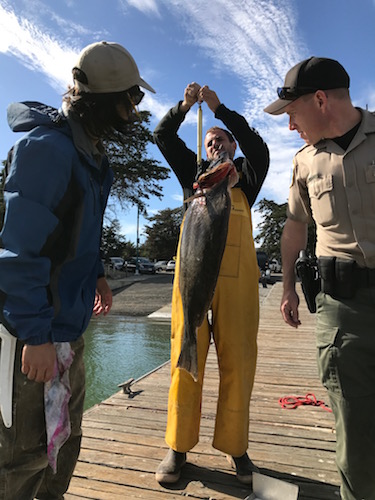 I tried to keep this in mind during the salmon sampling season. For the most part, anglers were cooperative, although there was definitely a range of emotions and reactions. There were a couple of times when anglers would be angry with me or make it difficult for me to sample, but these incidents were far outnumbered.

Many anglers knew the drill and laid out all the tagged salmon for me, and a few even thanked me for doing the work that I was doing. Others were sad but understanding, and many made sure to take photos with their catch before the beheading. And some would joke about it.

I found out that some anglers would call CDFW samplers “Grim Reapers” during salmon season. Now, I was assured this was all in jest, but I feel like that’s a little unfair. I mean, yes, we chop the heads off of the salmon, BUT the salmon are already dead, so… who are the REAL grim reapers in this scenario…? You be the judge. 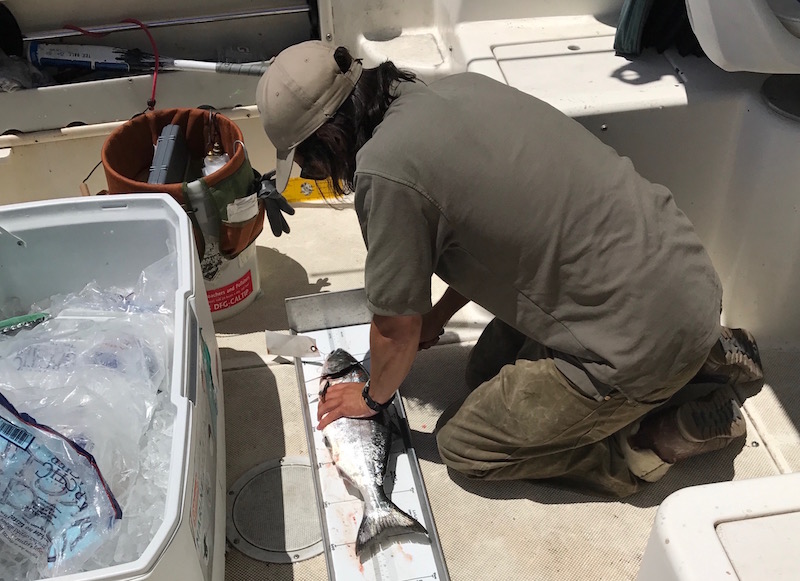 In any case, whatever the situation was, I found that if I acknowledged how inconvenient it was for me to take the salmon heads while emphasizing the importance of collecting these data, people generally conceded more quickly and easily.

Some people were excited that they could learn more about the fish they caught. Others, still caught up in the thrill of a good salmon bite, would enthusiastically explain how they reeled in the fish. And some anglers just wanted me to tell them they had the biggest catch of the day.

If the group was Filipino they would be pleasantly surprised that I knew what sinigang was, and the conversation would change course to: “Where in the Philippines are your parents from? Have you been there?”

And sometimes I would even get compliments about how cleanly and quickly I cut the salmon (although this only happened towards the end of the season, after having a lot of practice).

It seemed like the focus would shift from having to answer to an authority figure imposing the law to talking with a person they could relate to and have some commonalities with. Finding these connections definitely helped the workday go more smoothly, which affirmed for me that fishery and community management go hand in hand. 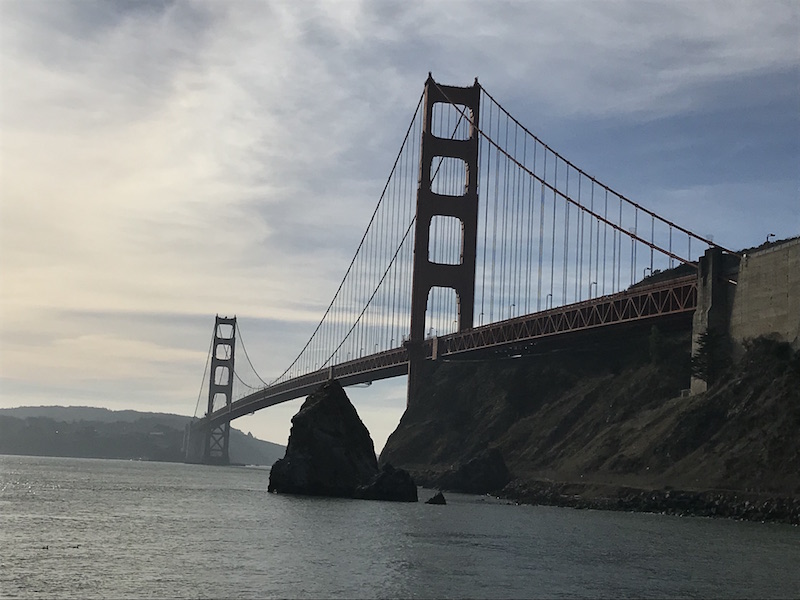 Anglers pick some of the most beautiful places to spend their time. Here is the view from Fort Baker Pier, a popular fishing spot inside the San Francisco Bay. Photo credit: Tiffany Yap

When I would tell people that I interviewed anglers, many expected that they would be rude and brush me off. But I would say 90-95% of my interactions were pleasant. I have lost count of how many times folks offered me food, drinks, fish, crab (none of which I accepted because it is against CDFW protocol, of course).

Being open and approachable afforded many opportunities to build agency-community relations and promote sustainable practices. While on the job, many people would come up to me because they were curious about what I was doing. Others just seemed to want to chat with me, maybe because I had a uniform on yet seemed nonthreatening.

I got to hear A LOT of mermaid jokes and some fun fishing stories, although apparently all fishermen are liars (wink, wink, nudge, nudge). Some folks even shared anecdotes about their family members, which was really sweet. It felt good to be connected to such a strong and fun-loving community.

These kinds of positive interactions allowed for educational outreach and awareness. Fishing regulations can be confusing - they can change from year to year, and different rules apply to different species depending on the season.

Protected Yelloweye Rockfish (Sebastes ruberrimus, left) can be confused with non-protected Vermillion Rockfish (Sebastes miniatus, right). One way to tell the difference is by comparing the jaw - yelloweyes have smooth jaws while vermillions have rough jaws. Photo credit: Tiffany Yap and CDFW

In addition, some species look similar to one another, and it can be difficult to discern some protected species from non-protected species. If anglers unknowingly kept illegal species, I would teach them how to identify the species and guide them to helpful resources to prevent future illegal takes.

Good agency-community relations also provide buffers for when agency mistakes happen (we’re all human, right?). I felt awful when I dropped that fish from the boat, but the anglers were understanding, and they even let me sample their fish the next time.

I really enjoyed working with the fishing community. January was my last month of working as a fish sampler, and I already miss it.